From overbearing grammar police, resentful haters, arrogant know-it-alls, and people whose only goal in life is to annoy, the internet is full of trolls who leave comments on your videos to seek attention, upset you, or simply spew hate online.

As a public figure producing music you'll be more exposed than most people to jerks online. Don’t let these people steal your joy in expressing yourself or building your name on this powerful platform.

Here are some things to consider so you can combat trolls quickly and effectively, no matter what platform you're on.

Not all who write negative comments on your tracks are trolls. There are also some few people who will criticize you with the intent of helping.

Understand that, though their comments may be painful, these people aren’t really haters and you can change their perceptions or even turn them into loyal subscribers.

These critics are vastly different from the trolls who are 100 percent haters, plain and simple.

Learn to distinguish between the two so you can deal with them correctly. Take a look at some of the comments of YouTuber Buehlero, who recently revealed that viewers who are trolling in his comments were the reason he wasn’t uploading videos anymore.

If you are looking into increasing your audience, by the way, consider buying SoundCloud Plays. Tracks with high play counts will naturally attract listeners, and that’s how your bought Plays can help increase your audience. Just think about the last time you chose to listen to a popular song over one with very few Plays.

How to Handle Trolls

Dealing with trolls takes a lot of patience, understanding, kindness, and the strong willpower not to respond in kind. You need to be tough and not easily crushed. Sometimes, you also need to lighten up and have a sense of humor, especially if you don’t want to end up quitting.

We get that this is all easier said than done, so here are some tips to make everything less difficult for you.

Don’t take it seriously and don’t take it personally. Haters don’t need a reason to hate. They also don’t seek you and your video out just so they can disrespect you. Don’t take offence. The hurtful words may be directed to you but they’re not about you.

In the photo below, it’s possible that the commenter is simply consumed with hate for all males. So, telling you all about how you mispronounced a word, for example, is just her way of proving to herself that males are the lesser gender. Or she is just messing around. Either way, don’t take it personally.

Remember that hate stems from feelings of inadequacy. So, keep that in mind next time someone trolls in your comment section.

Knowing that trolls don’t really hate you but instead have issues with themselves will make it easier to deal with them solicitously. So do reply with compassion. Don’t make the mistake, however, of thinking that you can “fix” them or change their minds. You can’t.

Just be kind. If you can also agree with them so that they’re left with nothing to hit you back with, then that’s even better. If someone told you “You’re stupid,” for example, you might agree and reply kindly with “Yes, I can be.” After all, we can all be stupid sometimes, can’t we?

Douse the hate with kindness and a little bit of humor.

Lighten up! By saying something funny, you’ll instantly neutralize the comment and discourage the troll from further commenting and agitating you and your listeners, as well. 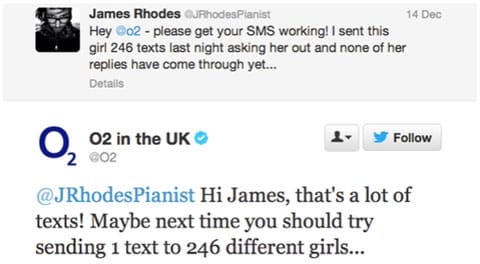 Look at the funny side
Image credit: Help Feed The Troll

There are times when it’s almost impossible to not argue or make a funny comeback, especially when there are lines being crossed. The comment below, left on a “cute dog and baby compilation” is a prime example.

So if you can’t take a comment lightly or if you just can’t help but be offended, then just try your best to ignore it. Leave SoundCloud for a bit and do something else that will take your mind off the subject.

When you come back and you still feel like you should put the commenter in his place, then by all means defend yourself, but do it in a professional way.

Dealing with trolls in a mature manner is what you should strive for every time you find one. You’ll earn your listener's admiration for that, and who knows, you may even attract new followers!

Getting more attention is one of the best ways to increase your audience. Buy SoundCloud Plays while you’re releasing your music and you’ll see what a massive number of Plays can do to continuously attract not just followers to your channel but also more organic Plays on your tracks.

The only way to handle nasty people on SoundCloud or anywhere else is by invalidating their words, not by arguing with them but ignoring them, diffusing the hate with humor, and not taking everything they say personally.

Beat negativity with positivity and you'll find that SoundCloud can still be a great source of joy — and income!